Onchocerciasis is a disease caused by infection with the filarial nematode Onchocerca volvulus, a type of parasitic worm. It is also called “river blindness” because the vector that carries and spreads the parasitic worm is a blackfly that breeds near fast-flowing streams or rivers, and because the disease causes blindness and other symptoms. In fact, onchocerciasis is the second-largest cause of blindness worldwide, affecting nearly 500,000 people. In the West African savanna areas, blindness due to onchocerciasis is so common that the disease had recorded a horrifying prevalence of 80 to 100% by the age of 20, and blindness peaking at 40 to 50 years of age. Meanwhile, onchocerciasis in the African forest regions causes more skin disease than blindness. A cross-country study found an estimate of 6 million people suffering from onchocercal skin disease, such as itch and nodules. The difference between the savanna and forest epidemiologic patterns are believed to be due to the existence of two strains of O. volvulus. As of 2006, onchocerciasis was estimated to have affected 37 million people. A majority of them are in rural areas and poorly developed countries in the African continent. Prior to any disease control, these regions suffer from serious socioeconomic impacts and depopulation. After control measures for river blindness prevention have been actively implemented, Abu Hamed in Sudan was declared as the first confirmed elimination of onchocerciasis in 2016. Soon, Columbia, Ecuador, Mexico and Guatemala have also completed the verification process for elimination by the World Health Organisation.

Onchocerciasis occurs when a human is infected with the parasitic worm O. volvulus through the bite of a blackfly. Once bitten, the blackfly deposits the infective larvae of O. volvulus into the human skin. Over the next 6 to 12 months, the larvae mature into adult parasites (microfilariae) of females and males. The females live in the skin or muscle while the males migrate between nodules to fertilise the females. A person may host as much as 60 or more female worms at a time. After 10 to12 months, the females begin to reproduce offspring. If left untreated, adults can live up to 15 years and each female can produce 1000 to 3000 offsprings per day! Hence a highly infective patient can easily contain more than 100 million worms in the body! When this infected patient is then bitten by another blackfly, the vector takes up the worm from the host and the cycles continue. Fortunately, blackflies are not efficient vectors for the disease as a person generally takes a minimum of 12 months to get infected. Therefore, short-staying travelers to the endemic regions of onchocerciasis are unlikely to become infected.

Onchocerciasis affects the eyes and skin. Prior to total blindness, patients suffer from itchy, red and swollen eyes, followed by vision problems and colour blindness. This is due to the presence of worms in the eyes causing keratitis, uveitis, and optic atrophy.

Besides, patients have subcutaneous nodules (or bumps deep in the skin) that contain 1 to 3 adult worms, and are found often over bony prominences. Skin disease is present as itching or itchy rash, patchy skin depigmentation (leopard skin) and darkening skin. Some may also have inflamed lymph nodes due to lymphadenitis because the worms also move via lymphatic systems. 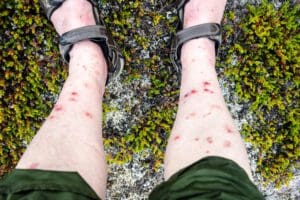 In the human skin, the adult parasitic worms are encapsulated by fibrous tissue and form subcutaneous nodules, often found overlying bony prominences. These worms move through subcutaneous skin, eyes tissues and lymphatic systems. Interestingly, when the worms are alive, they provoke a minimal immune response. But when they die, the body incites a severe inflammatory response. This is due to the presence of Wolbachia bacteria which are harboured by the adults and offspring worms in order to maintain their fertility and survival in humans. When the worms die, the sudden release of bacteria-derived antigens in large amounts can activate the body’s immune response, which is thought to cause onchocercal eye disease particularly the anterior (front) segment of the eye. The understanding of the posterior (back) segment of eye disease is unclear. It may be due to cross-reactivity between the worm’s antigens and the retinal antigens in the eyes which leads to an autoimmune attack on the eyes. This means that the eye disease caused by onchocerciasis is due to the body’s response towards both the worm and the bacteria. On the other hand, the skin diseases of onchocerciasis is mainly due to the worm itself.